This recipe is epic. It’s as good as you can get outside a very nice restaurant - it might even be better than many. Basically, it’s lobster meat ravioli. Sometimes, rather than making actual ravioli, I’ll simply fold the filling into a sheet of pasta (a lasagna noodle, for example). This is the recipe I’ll put here.

Step One: Cook the lobster

This is really easy. Get a big pot, say 12 quarts or so. Fill it 2/3 full of water. Bring it to a roiling boil. Insert lobster. Cook it until you see the lobster’s innards seeping out and congealing. Take the lobster out and plunk it into some cool water, both to stop the cooking, and to make it easy to handle. I used 3 lobsters, each about 1-1.25 pounds. In my opinion, it’s better to use several smaller lobsters for this recipe, than to use one large one. And, make sure that the lobsters are not just alive, but active when you pick them.

Lobster stock is one of those things that you’ll occasionally see in a recipe, and there is simply no way to substitute for it. None. Don’t make the recipe if you don’t have lobster stock. After this, however, you’ll have an amazing lobster stock. 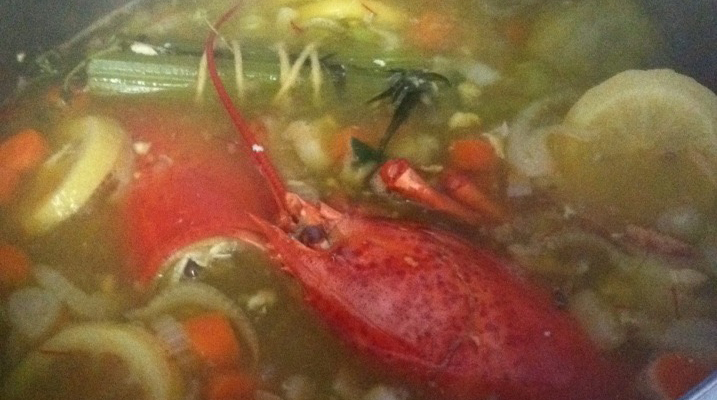 Keep that water, which you used to cook the lobsters earlier, boiling. Over a bowl, break off the cooked lobster claws, at the joint attaching to the body and set them aside (that’s the meat you want). Break off the tail where it joins the body, put that with the claws. Put everything else back in the boiling water - including the juice that came out as you were breaking parts off the lobster (remember you did this over a bowl?).

Now remove the meat from the lobster tails and claw arms, setting it aside. Keep all the shell bits, and any liquids which come out, and then add them to the boiling water. This will make a mess. Wear an apron.

Once all the lobster parts (but not the meat you took out) are in the boiling pot, take a minute and clean your workspace. Then add:

Boil this hard for about 10 minutes after you add everything, and then lower the heat and keep it on a slow boil for a long time. It’ll start smelling of the fennel, which is not immediately the best smell, but it’ll come together, I promise. I cooked this stock for about 6 hours, adding hot water to maintain the volume a couple times. Don’t let it get to less than 80% the original volume.

Finally, you’ll need another, similar sized container. Use a fine strainer and filter out all the lobster and vegetable parts by pouring the stock into other container(s). Rinse out the original pot and pour the strained stock back into the pot. Keep it warm.

Using the lobster-flavored butter, sauté all of a 10 oz package of fresh baby spinach. It won’t fit into the pan to start, but I’m always amazed at how much spinach you have to suaté to have a nice sized side dish.

Once the spinach is cooked, chop it up, and add it to the lobster.

Finely chop or shred some ricotta salata cheese into the mixture of lobster and spinach. I used 3 lobsters, and ended up with about a pound of meat, I added the 10 oz of spinach, and a light-pound of cheese. I like ricotta salata. It’s a harder, pressed variant of the cheese with a nice mouth-feel. If you can’t find it, or want to use regular ricotta, your measurements may need to change.

Start with 1 finely diced shallot and a couple sliced cloves of garlic. Sauté these in 3-4 Tbsp of butter. Add about 4 Tbsp flour to the sauté, and make a roux. Brown that for a few minutes.

Increase the heat, and slowly, while stirring the roux, add about 12 oz of lobster stock. Continue stirring until the sauce begins to thicken. Then slowly add another 12 oz of the stock, and stir until it begins to thicken. You want the sauce to be thick enough to coat the pasta - think bottled alfredo sauce - it may be important to add another couple Tbsp of flour, or a few ounces of stock at this point.

Add a big spoonful (2-4 Tbsp or so) of tomato paste to the sauce, and wisk it un until it is well distributed. Add some dried italian seasoning here. Reduce the heat to a slow boil.

Add 6-8 oz heavy table cream to the sauce. Stir and maintain the sauce’s consistency. Sauté for 5 minutes. Add salt and pepper to taste.

Add 2 oz cognac to the sauce. Stir until well integrated. Allow to boil for 30 seconds or so. Reduce heat to warm.

Place a cooked lasagna noodle on a plate. Put some ravioli stuffing (the lobster, cheese, and spinach mixture) on the noodle, and fold over the stuffing. Cover the noodle and stuffing with sauce. Garnish with some pecorino romano cheese, and green onion.

Last night, dinner was a tasty homemade pasta puttanesca. A few people, after seeing my photo on instagram, asked for the recipe. So here goes.

How to make this:

The goal here is to have a little bit of liquid, but not so much that the sauce is runny. It’s better if there is no liquid than if there is too much.

Boil your favourite pasta and enjoy.

Food
Previous Page: 3 of 3 Next